Church of Sts. Philip and Jacob the Apostles in Sękowa - artykul - VisitMalopolska

Church of Sts. Philip and Jacob the Apostles in Sękowa

Church of Sts. Philip and Jacob the Apostles in Sękowa 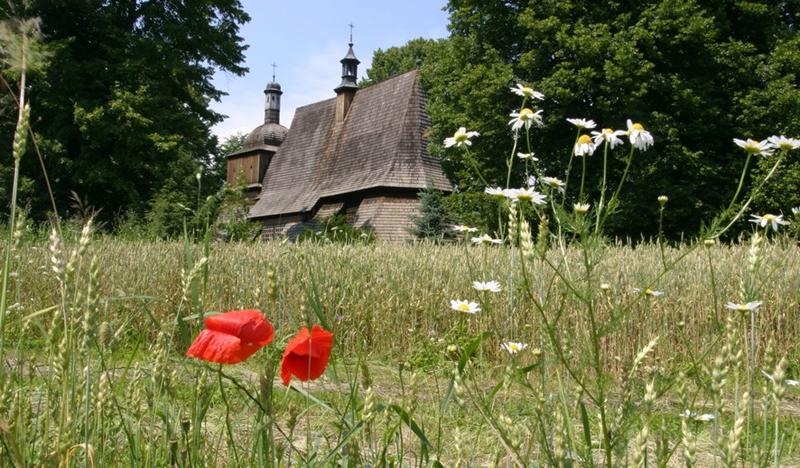 The small church in Sękowa is one of Małopolska’s most picturesque churches, and for a long time it used to enrapture artists, who gladly immortalised its soaring silhouette. The church was drawn, among others, by Stanisław Wyspiański, Józef Mehoffer and Włodzimierz Tetmajer. The extremely tall roof and wide open “soboty” arcades that encircle the church determine the beauty of the temple. The building, stunningly blended into the green landscape of the Low Beskids, will stay in your memory for long. Its exceptional aesthetic qualities were recognised on the international arena and in 2003 the church was inscribed on the UNESCO list.
The basic body of the church was created around 1520. The square-shaped tower with a domed helmet, which appears squat compared to the rest of the body of the church, comes only from the 18th century, similarly to the distinctive arcades. Interestingly, the tower is open on the ground floor, thanks to which you can see the construction. The church is oriented east and based on the framework construction from larch wood and manually hewn logs. It is almost entirely shingled, which adds a unique character. The church was extensively damaged during World War I: a line of Austrian trenches ran in the vicinity. The soldiers used the materials from the walls, the tower and the roof to build the trenches; they also devastated the interior and damaged most of the furnishings.
The renovation of the church started already in the 1918, but conservation work, with intervals, carried on until the end of the 20th century. Some of the equipment was saved, for example the Gothic baptismal font from 1522. The Gothic ornamented portals and a fragment of a 19th century polychrome on the southern wall of the chancel were preserved. Today the simple interior exudes peace and reverie. The only element with rich ornamentation is the reconstructed late Renaissance main altar from the 17th century. The side altars come from the end of the last century. In 1994 the Europa Nostra organisation (that propagates and protects natural and cultural heritage in Europe) rewarded the church for model conservation, a reminder of which, a medal, is hung inside the church. The restoration works, carried out with particular care to retain the authenticity, contributed to the decision to inscribe the church on the UNESCO list.

Local attractions !
Wooden Orthodox churches in Owczary, Łosie, Bielanka that blend into the landscape and enchant with their original architecture
Wooden churches on the Wooden Architecture Route in Binarowa, Libusza and Szalowa
Cemeteries from World War I on the hills near Sękowa