The subterranean salt kingdom in Wieliczka

The subterranean salt kingdom in Wieliczka 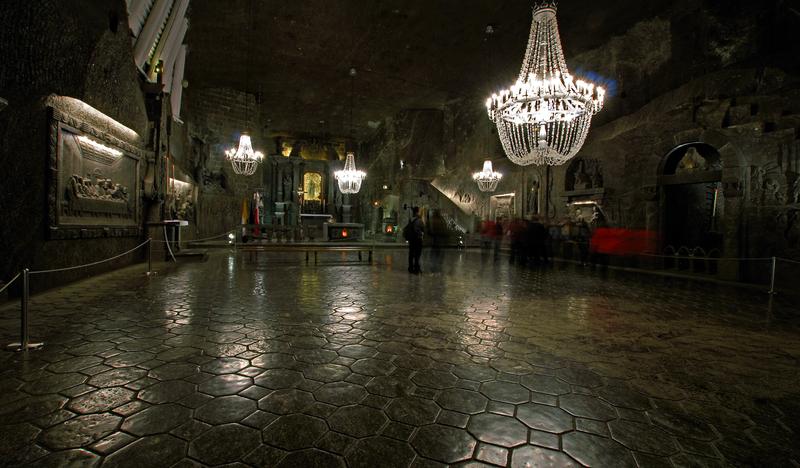 At the distance of 12 km south of Kraków lies the town of Wieliczka, where you will find a salt mine, founded in the 13th century, and now inscribed on the UNESCO list. The underground tourist route that leads through a network of corridors, huge chambers, and even chapels carved in salt (such as the spectacular Chapel of St. Kinga with salt bas-reliefs and altars) is the main attraction of the salt mine apart from the underground Kraków Saltworks Museum (Muzeum Żup Krakowskich). It houses a collection of exhibits devoted to the history and technology of salt mining. “On the surface” it is worth visiting the nearby Saltworks Castle (“zamek żupny”) with the second part of the exhibition of the above mentioned museum, which among other things, features a collection of 400 salt shakers. You can also take a walk to the nearby sloping main market square.
From Wieliczka you can head 16 km south for the town of Dobczyce, passing a small Romanesque church in Dziekanowice. On a rocky hill in Dobczyce, by the Dobczyckie lake, the ruins of a royal castle have remained to this day. A few old wooden buildings that have been moved here make up a small heritage park in front of the castle gate. Nearby, you can also find a Baroque church built from the stones acquired after the demolition of castle’s walls. An alternative route takes you from Wieliczka to Niepołomice (12 km to the east), where it is worth visiting a Renaissance royal castle with an arcaded courtyard and an interesting museum. In the town centre there is a Gothic church founded by king Casimir the Great with two chapels: a Renaissance one of the Branicki family, and a Baroque one of the Lubomirski family. Beyond Niepołomice stretches the Niepołomice Forest with many tourist trails. In the neighbourhood, one can also find the oldest female convent in Małopolska – the Benedictine convent in Staniątki.