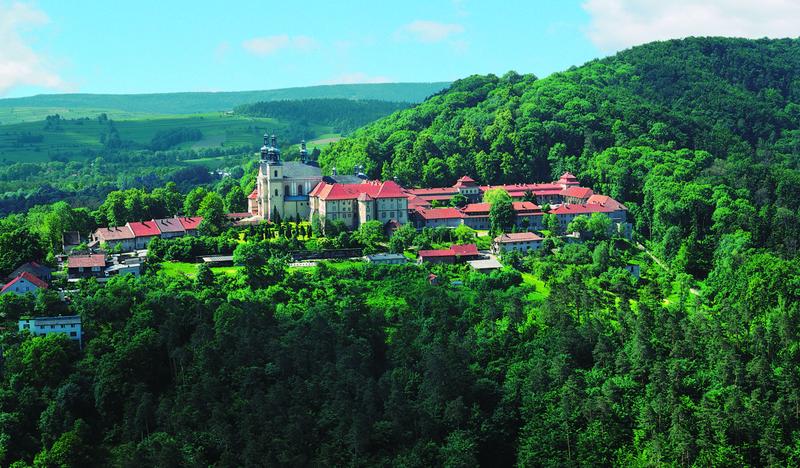 Kalwaria Zebrzydowska creates and exceptional cultural landscape, a place in which the natural and spiritual values are harmoniously combined. The architectural and park landscape complex includes the sanctuary and the Calvary, which is beautifully set against the environment. The buildings, together with the skilfully laid out network of paths, harmoniously blend into the landscape and create a natural scenery of a sacred character. This perfect combination of the natural landscape features and the works of human hands (churches, chapels, figures and bridges) became the basis for the inclusion of the landscape park and pilgrimage complex on the UNESCO list in 1999. Today, the complex is the largest (apart from Częstochowa) destination for pilgrims in Poland. The sanctuary and the Calvary owe its existence to Mikołaj Zebrzydowski, the voivode of Kraków. In 1600 he founded the Chapel of the Crucifixion of Jesus, brought the Bernardines to look after it (they built the church and the monastery), and generously supported the construction of the stations along the way of the cross, which were modelled on the stations in Jerusalem.The Calvary was set up on the hills, and the place was supposed to resemble the location of the holy city. Even the adequate distances, proportionally bigger than the ones in Jerusalem, were preserved while designating the spots for the chapels. Most of the 40 buildings making up the Calvary were built in the first half of the 17th century. The Holy Stairs covered with a semicircular roof were also constructed at that time. In 28 steps, the relics from the Holy Land were placed. During church fairs and holidays, processions march along the Calvary (the Paths of Jesus or Mother of God). They stop at the subsequent stations and listen to the deliberations, prayers and songs. It has also become customary for the lay persons to walk the Calvary paths individually.  Participation in the Passion Play during the Holy Week is an unforgettable spiritual experience. The scenes performed at individual stations are remarkably realistic and moving. The Passion starts on the Palm Sunday with the entry of Jesus into Jerusalem on a donkey and finishes with the liturgy of the Passion and death and the moving of the Holy Sacrament to the Church of the Holy Sepulchre. The most important temple in Kalwaria Zebrzydowska is the Basilica of St. Mary of the Angels (in the monastery complex). It features the image of St. Mary of Calvary, famous for its graces, for which a magnificent Baroque chapel was built (to the left of the main altar). The painting found its way to the monastery in 1641, when its owner noticed bloody tears on the face of the Madonna. The church commission was deeply mistrustful of the phenomenon, forbid the public display of the image and ordered to place it in the treasury. Under pressure from the Bernardines, the decision was changed and the miraculous painting quickly won the hearts of the faithful. Kalwaria Zebrzydowska became an important centre of Marian worship.

Passion Marian sanctuary – monastery of the Bernardines, ul. Bernardyńska 46 (access from the town centre along 3 Maja and Bernardyńska Street), Kalwaria Zebrzydowska,the monastery gate phone: +48 33 876 6304; pilgrims and tourists coming to the sanctuary in organised groups (of up to 15) can ask for a guide, who will present the history of the sanctuary or conduct prayers on the paths (booking phone: +48 33 876 6304); free admission to the landscape and pilgrimage park.

Local attractions !
Church of the Sepulchre of St. Mary in Brody, which is part of the Calvary sacred buildings complex.
Lanckorona with perfectly preserved, 19th century small-town wooden buildings.
Wadowice, the town in which pope John Paul II was born and grew up.