Salt mine in Wieliczka - artykul - VisitMalopolska

Salt mine in Wieliczka

Salt mine in Wieliczka 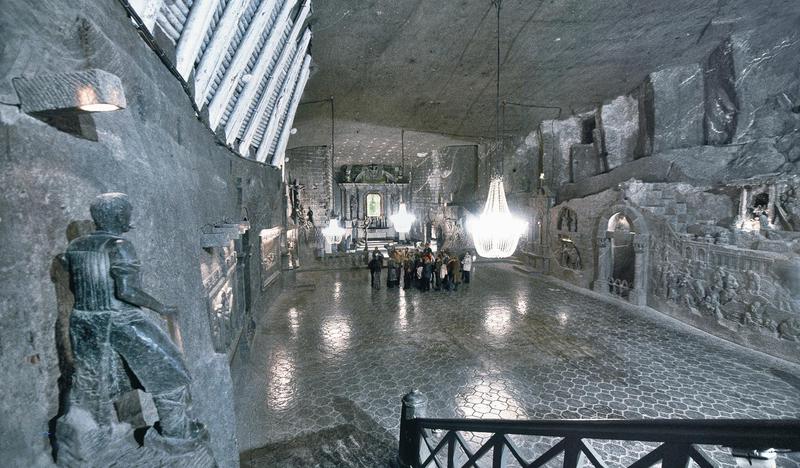 Thanks to the salt mine, Wieliczka is known all over the world. The salt from the surface mines was made here as early as 3500 years B.C., whereas the beginnings of the excavation of rock salt date back to the 13th century. From this period comes the oldest shaft discovered on the courtyard of the Saltworks Castle. At the beginning the salt mine belonged to the princes and the kings. Money obtained from the sales of salt were used for remuneration to the professors of the Kraków Academy, for building and renovating Kraków churches and tenements, as well as for developing the Renaissance Wawel castle. A few centuries later, in 1978, the salt mine was inscribed on the UNESCO list and its uniqueness on the world scale was appreciated. It is the only mining facility functioning continually from the 13th century. The original excavation sites reflect all stages of the development of mining techniques. Across centuries, 26 shafts were dug. On 9 levels, at the depths between 57 and 327 m, over 2000 chambers and almost 300 km of galleries were bored. Thanks to the high stability of the excavations, even the chambers mined towards the end of the medieval times have been preserved. The historic zone includes levels 1-5 (218 chambers and 190 galleries), and visitors can expect real miracles made from salt: chapels decorated with salt sculptures, salty lakes, old excavations with original wooden elements, old mining tools… The two-kilometre tourist route (levels 1-3) enables you to visit 22 chambers. There are 16 more waiting for tourists in the underground branch of the Kraków Saltworks Museum (level 3). The most famous stops on the route include the Baroque St. Anthony chapel (17th century, the oldest in the mine) and the St. Kinga chapel (bored in the 18th century, functions as an underground sanctuary since the 19th century). The credit for the delightful décor of the St. Kinga chapel goes to the miners, especially to self-taught sculptors: Józef and Tomasz Markowski, and Antoni Wyrodek. The picturesque underground lakes can be found in the Weimar, Erazm Baracz and Józef Piłsudski chambers. In the latter, ceremonial ferry crossings to the sounds of the orchestra were held. During the war the Germans attempted to adapt the Staszic chamber, the highest (36 m) on the route, for an aircraft parts assembly room. Presently, in the Warszawa, Wisła and Budryk chambers, an entertainment, sports and gastronomic centre was arranged. Particularly interesting is also the underground exhibition of the Kraków Saltworks Museum (visiting after completing the tourist route; included in the same ticket). The museum showcases exhibits presenting the development of the mining technology, for example, devices and tools, gins, horse treadmills, as well as mining maps and drawings showing the Wieliczka mine in the centuries past. A true treasure is the Horn of the Brotherhood of Wieliczka Miners from 1534, probably made in the goldsmiths’s workshop of Andrzej Dürer, the brother of the famous Albrecht from Nuremberg.

Local attractions
Saltworks Castle in Wieliczka, where you can see the second part of the exhibition found in the Kraków Saltworks Museum
Wooden St. Sebastian church, the oldest temple in Wieliczka
The heritage park of the Wooden Folk Architecture and fragments of the medieval castle in the nearby Dobczyce
Salt mine in Bochnia, where you can take a ride on an underground railway and go down the 140 metre slide