In the footsteps of chapels of the miners of Bochnia 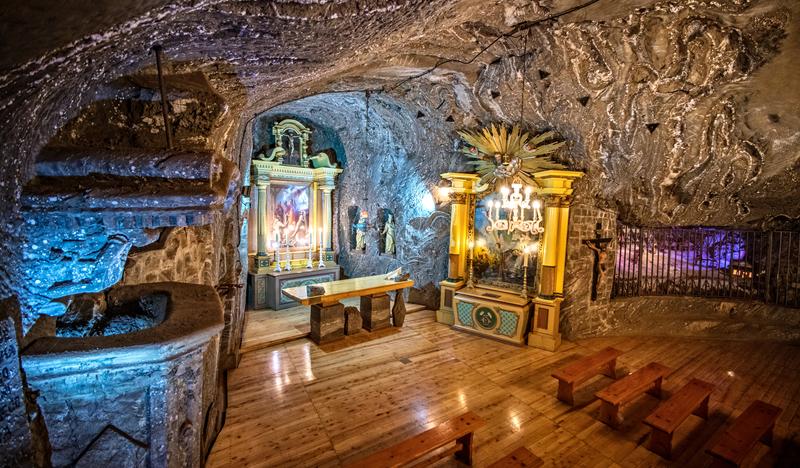 In the footsteps of chapels of the miners of Bochnia is the newest sightseeing offer of the Bochnia salt mine. The trail leads through the mine chapels and niches being traces of their past existence. Strong faith accompanied the miners during their work deep underground, hence, to honour their holy caretakers, they created numerous places of worship.
According to historic sources, the Bochnia mine was home to over thirty underground chapels. They had very important functions at the mine – from places of worship, sources of comfort, assurance of security, a place to repair one's mining lamp, all the way to being perfect reference points for orientation.

Today, the Bochnia mine has seven chapels available. Following the Trail of chapels of the miners of Bochnia, tourists will be able to see six of these.

THE CHAPEL OF MEETING THE MOTHER is contemporary; it was created in the year 2008, and takes the form of a stone sculpture representing the most important images from among Revelations of Mary throughout the world. They were collected in one spot to show the diversity of images of the Holy Mother, depending on the place, where the revelation took place.

THE OLD CHAPEL OF HOLY GUARDIAN ANGELS – only a trace is left of it, in the form of a niche and a short corridor. The chapel itself was moved several metres farther, where today's Chapel of St. Kinga stands.

CHAPEL OF ST. KINGA — the history of this chapel as a place of worship reaches as far back as 1747. At that time, at a depth of 201 m underground, on the level named I August, the New Chapel of Holy Guardian Angels was established – as patrons of carriers. In its existence, the chapel was rebuilt and expanded many times. The present layout of the chapel is a result of refurbishment work from 1980-1982. The most representative part of the chapel is the presbytery. The main component of equipment of the chapel is the altar of St. Kinga and a beautiful salt ceiling lamp. Since June of 2016, the chapel houses relics of its patron saint. A sacrificial table stands before the chapel; John Paul II held the canonisation mass of St. Kinga before it on June 16th, 1999, in Stary Sącz.

CHAPEL OF THE HOLY MOTHER OF BOCHNIA – located at a depth of ca. 192 metres, in the eastern, uppermost part of the Crystian chamber. It was created and consecrated in 2009 by initiative of the miners of Bochnia. The chapel uses one of the niches already existing in the body of salt, which was only subjected to minor mining work. The caretaker of the sanctuary of Bochnia transferred to the new mine chapel a copy of a miraculous painting, and the miners themselves made a large rosary of salt beads.

PASSIONIS CHAPEL – the oldest surviving chapel of the mine of Bochnia. Located on the Regis stairs in chamber XVI Rozpora, it is dated to stem from the year 1709, with the polychromy on the walls and ceiling stemming most probably from before 1763  (according to Teofil Wojciechowski) or before 1717 (according to Dariusz Śladecki). The miners would gather in the chapel to celebrate a special Good Friday mass as „passion or rather sermon of the Passione Christi”. In olden days, the main mass of crushers and diggers in the mine was the Passion of the Lord. Today, the Regis stairs to the chapel are home to stations of the Cross.

CRUCIFIX  CHAPEL – Remains of an old 18th century excavation that had a sacred function. The chapel's equipment was produced as a result of architectural components being carved in the salt body.


The visitors begin their journey with a trip down to the mine with a miners' lift, and then a trip with an underground rail car. The mine visit is highlighted by a visit in the largest salt chambers of the Bochnia mine — the Ważyn chamber.